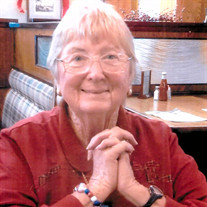 “Miki” Winifred Baker September 9, 1930-June 5, 2016 Winifred Gertrude Baker “Miki” entered into heaven on June 5, 2016, where she has been united with family and friends. Miki married Calvin Baker in 1947. As a team, they owned and operated two photo studios, one in Hawthorne and one in Inglewood, California. They moved to Apple Valley in 1958. Together they opened and operated the Alamo Studio in Apple Valley and later opened Cal’s Pawnshop in Victorville. After her children were grown, Miki decided to pursue a degree in nursing and became a LVN in 1972. She worked at Victor Valley Community Hospital until she retired at age 67. Miki was always a loving, devoted wife who dedicated herself to supporting her husband, Calvin Baker, in all of his endeavors. Miki was preceded in death by her parents, Jack and Eva Ross, two brothers, Jack and Delbert Ross, her husband, Calvin Baker, and three grandchildren, Jeffrey Paul Romero, Calvin Louis Romero, and Grace Ige. She leaves her three children, Linda McGuyer (husband Tony) Calvin Dennis Baker (wife Susan) Andrew Palmer Baker (wife Debra) and her 4 surviving grandchildren, and 7 great grandchildren. We wish to thank Seasons Hospice and Foremost for caring for our mom during the last months of her life. In lieu of flowers, the family would appreciate donations made to HDC-Next. We will always remember her love for her Savior, Jesus Christ, her zest for life, and her loving support for all her family. We invite our family and friends to share her celebration of life on Tuesday, June 14, 2016. There will be a viewing at 10:30 a.m., and a memorial service at 11:30 a.m. at High Desert Church, 14545 Hook Blvd., Victorville, CA.

The family of Winifred Gertrude Baker created this Life Tributes page to make it easy to share your memories.

Send flowers to the Baker family.