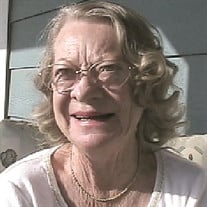 Theadora passed away January 30, 2016, while sleeping comfortably. She is survived by her three sons - William, Michael, and Johnny, her Step-daughter Claudette, her 4 grandsons and 2 great grandchildren. Theadora was born January 11, 1943, in San Antonio Texas, to Herman and Grace Cepler. She grew to become a remarkably talented, and gifted woman with a life as interesting as they come. She started at the age of two practicing to participate in the family business, as the youngest member of “The Great Cepler Family,” high wire circus performers. With them, she traveled the world in her early years, and was once the youngest high wire walker in the world at the age of 6. She transitioned from celebrity to motherhood, and still pursued various activities, hobbies and trades; a Cub Scout Den Mother, a horseback barrel rider, a journeyman carpenter, a ship pipe fitter and welder, a champion dog breeder, and the list goes on. And all while raising 3 boys. Through her years she touched so many lives. The first half of her adult years was spent in San Diego, where she learned to play the drums for a Country Western band, “The Country Kin Shin Kickers.” She later chaired a fund raising campaign for a city beautification project for her neighborhood park. Late in the eighties, she moved with her Husband Claude, up to the high desert. There she continued to raise and train championship blood line “3B Boxers,” raised horses, and ran all the electrical wiring for her home! Claude Olvera passed away in 2005, and she later met a very special person in her life, Bob McCabe, whom she grew to love dearly, until his crossing, not so long ago. Resourceful, driven, respected, now sailing free, ready for her new challenges. We’d say Rest in Peace, but I doubt she’d agree. “We cherish your memory, Mom, and will miss you always.”

Theadora passed away January 30, 2016, while sleeping comfortably. She is survived by her three sons - William, Michael, and Johnny, her Step-daughter Claudette, her 4 grandsons and 2 great grandchildren. Theadora was born January 11, 1943,... View Obituary & Service Information

The family of Theadora Olvera created this Life Tributes page to make it easy to share your memories.

Send flowers to the Olvera family.