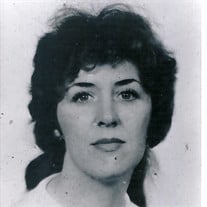 In Loving Memory Ruby Ann Sedillo February 8th, 1936- April 13th, 2017 Ruby Ann Sedillo, age 81 died of natural causes on April 13th, 2017 in Apple Valley, California. Ruby is survived by her grandson, Paul, his wife, Janice, their two sons, Gavin and Caine, her granddaughter, Juli, her husband, Sean, and their three children, Daniel, Samantha and Miranda. She is also survived by her niece, Barbara, and her nephew, Billy, and their families. She has family in England and Ireland, including a daughter, Christina, and her family. Ruby is preceded in death by her daughter, Margaret, and her husband, Cisco. Ruby was born on February 8th, 1936 in Belfast, Ireland to parents William Carson and Margaret Neil. She was raised in Belfast, Ireland the youngest of 8 children. As a young adult, she moved to England where she was learning to be a nurse’s assistant. She came to the United States in 1960 at the age of 24. She met and married Narcisco Sedillo, and together they raised her daughter, Margaret, in the Los Angeles/Long Beach area. Ruby moved to the High Desert in the early 1980s after the sudden death of her daughter, Margaret, to be closer to her grandchildren, Paul and Juli. She bought a bar and restaurant in Apple Valley and called it Ruby’s High Desert Inn. She was a social woman, well-known in the community. She was very involved in helping raise her grandchildren, Paul and Juli. She enjoyed dancing, singing, baking, cooking and camping with her family. Her family and friends will remember her as a silly, fun-loving person. A memorial service is scheduled for Ruby Sedillo on Sunday, April 30th at 11am at Victor Valley Memorial Park and Mortuary in Victorville. All are welcome to celebrate Ruby’s life. We would like to thank all family and friends near and far for their kind words and help during this difficult time. Flowers and can be sent to Victor Valley Memorial Park and Mortuary. 15609 11th Street, Victorville.

The family of Ruby Sedillo created this Life Tributes page to make it easy to share your memories.

Send flowers to the Sedillo family.