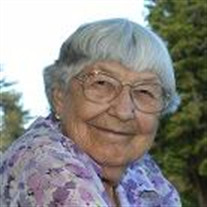 Ruby Flora Dailey, 92, Belfair, WA. Peacefully passed away June 24,2015 following her courageous battle with cancer. Ruby was born on the family farm in Trenary, MI to William and Leona Flynn. She was the youngest of four children and the only female. Her mother passed when Ruby was 13 forcing her to become a mother to her three older brothers and father. Although it was a hardship, she managed to take care of the chores at home and still attend school. She was the captain of her girls basketball team and also found time to be in a school play. She graduated from Trenary High School class of ‘41 along with 22 others including a lifelong friend, Ruth Chenail who still resides in the Trenary area. In the fall of 1941 her father and brothers all left the farm to pursue jobs or enter the service. She was able to find work as a second cook working seven days a week at a lumber camp. In the spring of 1942 she moved to Detroit and was hired at Cadillac Motor Company which produced airplane parts for the war effort. She operated an internal grinder machine and was one of the original “Rosie the Riveters”. It was here she met and married the love of her life for 60 years, Owen Dailey Jr. When the war ended, Owen and Ruby moved to Monroe, MI and operated a coffee shop and later a lumber yard. In 1948 along with Owen’s parents they started Dailey Mfg. in Detroit. There, they manufactured custom windows and designed and built custom homes until 1958. Due to health reasons they moved to Arizona for a short time and then on to California in 1964. In 2004, Ruby relocated to Washington State to live with her son and daughter-in-law. Ruby was an avid reader and loved to do word search puzzles. She also enjoyed watching basketball and was a long time Laker fan. Ruby is survived by her son Owen Dailey III (Rebecca) of Belfair, WA, 5 Grandchildren, Owen Dailey IV(Michal) of Puyallup, WA., Kenneth Dailey of Fife, WA., Shea Dailey of Denver, CO., Kris Marquis (Mike) of Whitehouse, TX., Lori Watters (Todd) of Des Moines, IA. 10 Great-Grandchildren, numerous nieces and nephews and her beloved pet basset hound, Riley. Ruby was preceded in death by her husband Owen Dailey Jr., a daughter, Darlene, her parents, and brothers Clarence, Vernon and Robert. In lieu of flowers, the family asks that you consider making a donation in Ruby’s name to the Shriner’s Hospitals for Children.

Ruby Flora Dailey, 92, Belfair, WA. Peacefully passed away June 24,2015 following her courageous battle with cancer. Ruby was born on the family farm in Trenary, MI to William and Leona Flynn. She was the youngest of four children and the only... View Obituary & Service Information

The family of Ruby Flora Daily created this Life Tributes page to make it easy to share your memories.

Send flowers to the Daily family.