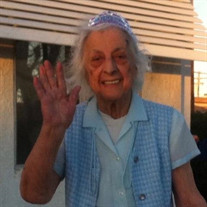 Rose Marie Toscano Santoro Burwell February 6, 1916 - March 4, 2017 Rose Marie Toscano Santoro Burwell, 101, died peacefully on March 4 at the assisted living facility she had been living at for the past 9 months. She had a full life as a wife, mother, grandmother, great grandmother and friend. Family and friends remember her most for her spirit, wisdom, compassion, never give up attitude and sense of humor. Her first husband died in 1960, and her second husband, John “Jack” Burwell died in August of 2016. Rose and Jack enjoyed traveling, near and far, taking care of their many rose bushes, and spending time with family. Rose was born in Philadelphia, Pennsylvania in 1916. Her father, Antonio Toscano, and mother, Vittoria Morano Toscano were both born in Calabria, Italy. She spent her growing up years in Philadelphia. She was proud to let everyone know that her birthday was the same as our late President, Ronald Reagan. During World War II she wanted to join the Army, but they would not allow women to join and fight, so she did the next best thing and became one the famous, “Rosie the Riveter” women. She moved with her first husband, Pasquale Charles Santoro, and her two young sons, Angelo William Santoro and Charles Paul Santoro to South Gate, CA. in 1953. Rose is the last living sibling of her family, which included brothers and sisters; Frank Toscano, Anthony Toscano, Josephine Dellmo, Evelyn Candora and Pat Toscano. Rose will be missed dearly by her sons, Angelo and Charles, her grandchildren; Angela Craft, Joseph Santoro, Coleen Santoro, Anthony Santoro, Michael Santoro, great grand children; Andrew Jones, Ashley Jones, Aiden Jones, Allison Jones, her daughter-in-law, Suzanna Santoro and her grandson-in-law, Curt Craft. In addition to being missed by her two ex-daughters-in-law; Cathy McCabe and Kathy Dimmet as well as all of her surviving nieces and nephews and her step children; Linda Burwell, Pam Turner, and John Burwell.

The family of Rose M. Burwell created this Life Tributes page to make it easy to share your memories.

Send flowers to the Burwell family.