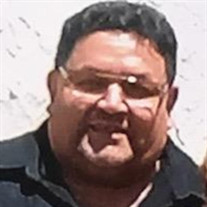 Pastor Robert E. Quintanar Jr, 62 went to be with the Lord on December 16, 2020. He was born and raised in Victorville, attending Irwin Elementary, Victor Valley Junior High and graduated from Victor Valley Senior High in 1976. In 1981 he married Stella Pizzaro. In 1992 they were ordained as Pastor’s. Bob and Stella moved to Lancaster, CA where they started their first church, New Beginning Christian Center. They faithfully served as Pastors for 13 years at which time they left Pastor Ray Hernandez in charge. The Lord then moved them to Kauai, Hawaii to start another church, and they ministered there for 3 years. They were planning on coming back to the mainland to start a church in Albuquerque, New Mexico. However, before they moved to New Mexico, Stella was diagnosed with Cancer. They moved to New Mexico in January of 2007 and unfortunately Stella passed away on November 9, 2007. While still overseeing his churches in Lancaster, CA and Kauai, Hawaii. Pastor Bob then moved back home to Victorville, Ca and continued to serve the Lord by attending “The Church for Whosoever” in Apple Valley. Pastor Bob was also employed as a bus driver for Victor Valley Unified School District for the past 6 years. Not only did he serve in the church but he also ministered to the bus kids and students. He was preceded in death by his Father, Robert E. Quintanar Sr. and his wife Stella P. Quintanar. He is survived by his Mother, Ramona Quintanar of Victorville, his children Steven Decker (Alissa) from Crestline, Larrisa Pica (Jeff) from Palm Bay, Florida and Michael Woods from Victorville. His grandchildren, Aihelya Decker, Mariah Pilmer, Dominque, Gabrielle and Deangelo Woods, and Isabella and Sophia Pica. His Sisters, Rebecca Zazueta (Efrain) from North Edwards, Rosemary Gonzales (Ruben) from Tempe, Arizona, his brother Roy Quintanar (Debbie) from Victorville, and his Sweetheart Lysa. He is also survived by many nieces, nephews, cousins and many friends. ‘WELL DONE, THOU GOOD AND FAITHFUL SERVANT” A private graveside service will be held for the immediate family, and a Celebration of Life will be taking place in the coming months. In lieu of flowers. Please make a donation in memory of Pastor Bob to: God's Hand Extended or Victor Valley Rescue Mission.

Pastor Robert E. Quintanar Jr, 62 went to be with the Lord on December 16, 2020. He was born and raised in Victorville, attending Irwin Elementary, Victor Valley Junior High and graduated from Victor Valley Senior High in 1976. In 1981 he married... View Obituary & Service Information

The family of Robert Estrada Quintanar Jr created this Life Tributes page to make it easy to share your memories.

Pastor Robert E. Quintanar Jr, 62 went to be with the Lord on...