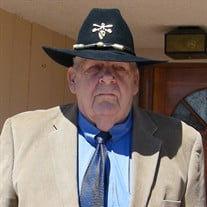 Philip Lawrence Drew passed away peacefully in his sleep in Apple Valley, CA on May 6, 2017, his strong, steady hands finally at rest after a long life well lived. Phil was born in Chicago, IL on February 3, 1935 to Clifford and Lucille Drew.... View Obituary & Service Information

The family of Phillip Lawrence Drew created this Life Tributes page to make it easy to share your memories.

Philip Lawrence Drew passed away peacefully in his sleep in Apple...

Send flowers to the Drew family.