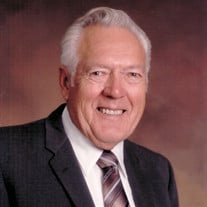 Paul Leo Lenze (1925 - 2017) Paul Leo Lenze passed away on November 2, 2017 at the age of 92 with family at his side. Paul had been in failing health since a fall in September 2017. Paul was born on June 17, 1925 to his parents Albert and Ann Lenze in St Mary's Pennsylvania and was one of 13 brothers and sisters. Paul was a resident of Brookdale Assisted Living in Apple Valley and leaves behind his second family of dear friends and those care givers who genuinely made a difference in his life. Paul joined the U.S. Navy in 1944 and is a WWII veteran serving his country with pride and honor. "We did what we had to do for our country". After leaving the Navy, he met and married his loving wife Helen Sirak of Erie Pennsylvania on June 28, 1948. In 1961, he moved his family to Lompoc, California then to Chino in 1963. Paul and Helen finally settled in the High Desert in 1985. Paul retired from General Telephone, Pomona with 32 years of service. He was a lifelong member of the Knights of Columbus, and a member of the Elks of Hesperia as well as a past member of the Hesperia Leisure League. After Paul retired, he and Helen spent their years together traveling the country with the Pomona Roamers and alone in their RV where he enjoyed fishing for trout in the various rivers and streams of California. He and Helen also enjoyed long walks through the campgrounds where they always made friends along the way. Paul was a jack of all trades. He built several of the family homes from foundation to roof and taught those skills to his 2 sons. Paul is preceded in death by his wife Helen of 53 years and 7 of his brothers and sisters. He is survived by daughter Mary Ann of Montclair, California. Daughter Carol and her husband Rick of Peyton Colorado. Son Paul and his wife Maxine of Oak Hills, California and son Donald of Bullhead City Arizona. He is also survived by 7 grandchildren, 6 great grand children and 3 brothers and 2 sisters. A Memorial celebration for Paul will be held on November 16, 2017 at 10:30 am at Sunset Hills Mortuary 24000 Waalew Road, Apple Valley, CA 92307. A reception will follow the Memorial Service. In lieu of flowers, please consider donating to the Wounded Warriors Project or Folds of Honor so that they can continue to care for our Veterans. On behalf of the Lenze family, thank you.

The family of Paul Leo Lenze created this Life Tributes page to make it easy to share your memories.

Send flowers to the Lenze family.