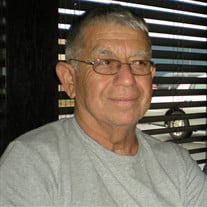 November 28, 1938- May 5, 2020 Pasquale Marquez, a longtime resident of Barstow and later, Apple Valley, California, passed into eternal rest with his Savior, Jesus Christ, on May 5, 2020. Pasquale was born in Rialto, California on November 28, 1938 to Francisco and Rita Josephine (Gonzalez) Marquez. He served in the U.S. Army, stationed in Korea from January 1962 through December 1963. On February 27, 1965, he married Josephine Alvarez, with whom he raised five children. He was employed at the Marine Corps Logistics Base, Barstow, Yermo Annex, as a Heavy Mobile Equipment Inspector for the Department of Defense. He retired in 1997, with 37 years of military and civil service. He regularly attended Victor Valley Bible Church with his wife for more than 15 years and moved to Apple Valley in 2014. He is preceded in death by his parents, Francisco and Rita Josephine, Stepmother, Margarita, his brother, Francisco Jr., and half-sister, Virginia. He is survived by his wife, Josephine, his children, Lawrence Marquez, Laurie and son in-law Pete Andreas, Linda, Dennis, and Patrick Marquez, seven Grandchildren, one Great-Grandchild, his brothers Robert and sister in-law Lila, Tony, and Jesus, his sisters, Maria, Lupe and brother in-law Neil, and his elder brother’s widow, his sister in-law Ilse. Pasquale was a dedicated Husband, Father, Grandfather, and Great-Grandfather who gave much of his time and resources to his family’s well-being. His interests and hobbies were family oriented, as well as beneficial to his friends and neighbors. He involved himself in coaching Little League, cutting firewood, fishing, masonry, carpentry, as well as repairing and restoring cars. His legacy lives on through his children's work ethics and devotion to God, family, and patriotism. He is remembered by his selflessness and willingness to help and share his knowledge to anyone who asked. Time and place of memorial and services are to be announced, as we anticipate the pending easing of restrictions on public gatherings. The family request that in lieu of flowers, please consider making a donation to City of Hope https://ourhope.cityofhope.org/give/286522/?pk_vid=5916093b15d20dbd159227213616223b#!/donation/checkout https://secure3.convio.net/coh/site/Donation2?df_id=1800&1800.donation=form1&_ga=2.47787431.1087773170.1592270452-692431414.1592270452

November 28, 1938- May 5, 2020 Pasquale Marquez, a longtime resident of Barstow and later, Apple Valley, California, passed into eternal rest with his Savior, Jesus Christ, on May 5, 2020. Pasquale was born in Rialto, California on November... View Obituary & Service Information

The family of Pasquale Marquez created this Life Tributes page to make it easy to share your memories.

Send flowers to the Marquez family.