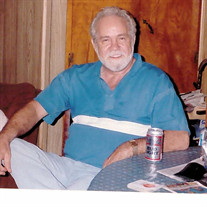 Mont “Pete” Vernon Elkins, Sr. Pete was born in the beautiful hills of Ferrellsburg, West Virginia to Delmont and Ruby Pearl Elkins. He grew up in Logan, West Virginia. In his early adult life, he moved to Cleveland, Ohio. From there he went to Chicago. Then being in the lonely city of Chicago for years, he moved on to Southgate, California and started working at General Motors, where he worked for 30+ years. He retired and moved to the High Desert in 1995, where he has been ever since. Pete was a God loving man and knew more about the bible than most people, but you would never know it by the way he lived. He was married 5 times! He was preceded by his parents, Delmont and Ruby Pearl, one sister, Gloria Mae Ellis, one brother, Jess Willard Elkins, and one son, Darryl Lee Elkins. He is survived by ex-wife, Alice Martinez, and his current wife, Sue, who he stayed loyally married to for 27 years. Siblings: Regina Merle “Sissy”, Landville, Avenol, Larry Dale, Otis Estelle, Audrey Faye, and their spouses. His loving children: Linda Kay Schultz, David “Bryan” Elkins, Kimberlee Kay Dastmalchi, Tambra Lynn McMurray, Mont “Pete” Vernon Elkins Jr., Misty Mone Young, Keith Joseph Elkins, and their spouses. His grandchildren: Jennifer, Ashley, Saxon, Teagan, Kira, Mathew, Meghan, Michael, Ricky, Kenny, Tiffani, Ryan, Mackenzie, his little “George”, AJ, and one grandson on the way. Two great grand-daughters: Olivia and Kate. And one great grandson: Landon. All of whom he loved and was very proud of. Services will be held at the Victor Valley Memorial Park and Mortuary on June 30th, 2017 at 4:00pm. A viewing will be held prior to the service at 3:00pm at the same location. His ashes will be buried back in the beautiful hills of Logan, West Virginia at a later date.

Mont &#8220;Pete&#8221; Vernon Elkins, Sr. Pete was born in the beautiful hills of Ferrellsburg, West Virginia to Delmont and Ruby Pearl Elkins. He grew up in Logan, West Virginia. In his early adult life, he moved to Cleveland, Ohio. From there... View Obituary & Service Information

The family of Mont "Pete" Vernon Elkins Sr. created this Life Tributes page to make it easy to share your memories.

Send flowers to the Elkins family.