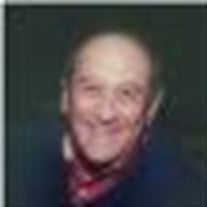 Michael Anthony "Mike" Yannone February, 20, 1936 - March 17, 2015 Michael Anthony "Mike" Yannone passed away suddenly on Tuesday, March 17, 2015 at home in Apple Valley, California while enjoying an evening of dinner and card-playing with his beloved wife of 54 years, Lorraine Yannone, and dear friends. Mike was known as "Dad" to his four adult children who adored him: Kitty Yannone Lagareta, Judith (Yannone) Ferguson, Steven Yannone and Alex Yannone. He was the beloved "Papa" to his eight grandchildren: Anthony Michael Ferguson (Randi), Chad Dudley (Vikki), Catherine Ferguson, Aimee Ferguson, Kalin Dudley (Melanie), Nathan Yannone, Gianna Yannone, and Zachary Yannone; and to his ten great-grandchildren and one great-great-grandchild. Mike and Lorraine were also surrogate grandparents to their two godsons, Ted and Reed Tyber. He was the loved and loving older brother to Patricia Rabayda (Danny), Thomas Yannone (Carol), Andrea Yannone (Louis Baez) and brother-in-law to Alexis King (Jim). Mike was "Uncle" to 12 nieces and nephews and to his large extended family in California and Pennsylvania. His 11-year-old great-grandson, Michael, spoke for everyone in the family when he said, "Papa always made you feel like the most loved and important person in the world." Mike was born in Coaldale, Pennsylvania on February, 20, 1936 to Phyllis (DiBuo) and Michael S. Yannone who predeceased him. After graduating from high school, he attended the Thaddeus Stevens College of Technology in Lancaster, Pennsylvania where he received a degree in Electrical Engineering. Mike served in the U.S. Marine Corps from 1958 to 1964 and trained at Camp Lejeune. When the Marine Corps took Mike to California, he met the great love of his life, Lorraine Panebouef, and they were married on February 11, 1961 at St. Francis of Assisi Church in Los Angeles California. They celebrated their 50th wedding anniversary in 2011 by renewing their vows and sharing their love with family and friends who traveled from all over the world to be with them. They treasured each moment and each year together and often spent time during their 15 years of retirement traveling in their RV to visit family members across the United States. Mike and Lorraine always made family their highest priority and never missed a chance to be there for all the significant family moments between birth and death to offer support or to share in celebration. They did not miss a single high school, college, or post-graduate graduation for any of their eight grandchildren and took each on a special trip to a location of their choice after high school. Mike and Lorraine moved to Victorville with their children in 1966 and Mike went to work at Southwestern Portland Cement Company (later known as Southdown and now known as CEMEX) where he built his career over the next 35 years. He served two separate terms as manager of the Victorville plant before moving to the corporate staff. Mike was asked to temporarily move to Fairborn, Ohio with his family to work on the development of the Southdown plant there. When the family returned to the High Desert, Mike then headed the design and construction of the Black Mountain Plant in Apple Valley, California. At his retirement in 2000, his colleagues most frequently described him as "one of the most respected and respectful leaders" they had ever worked with and someone who was fair, caring, innovative and inspiring. Mike was an active member of St. Timothy Episcopal Church in Apple Valley, California where he served in the vestry as Chair of the Finance Committee and as the church treasurer. A memorial service and celebration of life will be held at 11:00 am on Wednesday, March 25, 2015 at St. Timothy's Episcopal Church, 15757 St. Timothy Road, Apple Valley, California 92307. In lieu of flowers, the family requests that donations be made to St. Timothy's Episcopal Church in memory of Michael Yannone for those who would like to do so.

The family of Michael Anthony Yannone created this Life Tributes page to make it easy to share your memories.

Send flowers to the Yannone family.