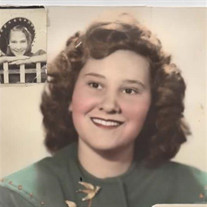 Mary Julia Carter passed away peacefully August 18, 2019. She was 89 years old, or in her words, close to 90. She was born in Illinois, but when she was a girl her mother and 4 siblings relocated to California. While still attending high school she met Edward E. Carter who she married in 1948. Because she married while still in school she was expelled. Determined to finish high school she appealed the school's decision and won, graduating a semester later than her classmates, but a high school graduate nonetheless. Always proud of her diploma, she later enrolled into night school for nurse's training. Upon completion of her LVN training she worked for only 3 years (1960-1963) as a “practical nurse” for South Bay Hospital, Redondo Beach, CA. Her education and aspirations to be a nurse were important to Mary, but most important to her was her family. She dedicated her life to her husband, Edward and their four children. She was married to Edward until he passed away in 2015. They were married 67 years, or in her words, close to 70. Mary is predeceased by her husband, Edward and her son, John E. Carter. She is survived by her daughter, Trudi D. Waters, son-in-law, Michael D. Waters, grandson Andrew C. Smith and Andrew's fiancee, Emily E. Phelps; and, daughter, Carrie L. O'Connor, son-in-law, Michael O'Connor, grandson Zebulon Lemley, his wife Rebecca Lemley and their son, Landon and grandson, Zachary Lemley; and, daughter-in-law, Diana Carter (wife of deceased, John E Carter), grandson, Jacob E. Carter, his wife Katie Carter, great-grand-daughter Kylene Curry and her husband Demetrich Curry and their son, great-great-grandson, Jayden Curry, great-grand-daughter, McKayla Carter, grand-daughter, Jessica Anna Carter and her partner Steve Young and great-grand-daughter Lillianna Rose Blumfield; and, son, David S. Carter, grandson Daniel Carter, great-grandson Edward Carter, grand-daughter Breeana Carter and her mother, Robyn Gugler, and grandson Mason Allen Cronk-Carter. Mary is also survived by sister, Georgia Smith, San Antonio, Texas and sister Marjorie Helms, Palmdale, CA as well as several nieces and nephews. Mary will be greatly missed by her family and friends. She was a beloved wife, mother, sister and friend. May God rest her soul. Peace, mama. A graveside service will be held 8/23/2019, 10:00am at Victor Valley Memorial Park. There will also be a memorial service in April, 2020, so that out-of-state family and friends may plan for and attend. Please send use Victor Valley Memorial Website to post memorials and photos which may be displayed at the April service in lieu of flowers or donations.

Mary Julia Carter passed away peacefully August 18, 2019. She was 89 years old, or in her words, close to 90. She was born in Illinois, but when she was a girl her mother and 4 siblings relocated to California. While still attending high... View Obituary & Service Information

The family of Mary Julia Carter created this Life Tributes page to make it easy to share your memories.

Send flowers to the Carter family.