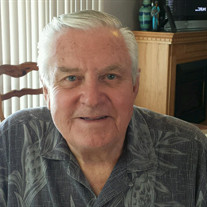 Lawrence James White, Born 1941 in Winnipeg Canada, peacefully embarked on his final adventure February 17, 2017. In his words, he won the winning lottery ticket. Lawrence aka Jim White served in our countries Army from 1963 to 1965 then returned home to Simi Valley where he resided until 1970. Jim, who made friends easily decided to embark in a business venture with one of his services buddies which lead to over thirty years of a success at Victor Valley Van and Storage Company. Jim, always a hard working business man, husband and father enjoyed spending his free time on the golf course. Jim, held many awards for his golfing abilities, which still sits in a sealed case displayed at the Apply Valley Country Club. Jim was a frequent traveler who was always in search of the perfect green. This gave him an opportunity to play on some of the most desirable golfing locations in the world. Later in life, he hung up his golf clubs for cruises. He loved to cruise with his wife Marsha where the food was bountiful and free. He was a member of the Rotary Club, participant in a bowling league and prominent figure of multiple sporting events for his children and grandchildren. Jim, eventually decided that retirement wasn’t for him. He took on a new challenge in Real Estate. His love for sales and optimistic attitude gave him the ability to make things happen and overcome just about any situation. He could sell just about anything, homes were easier, as he would said, everyone needs a place to put their groceries. Jim had an incredible sense of humor, not only did his smile light up a room, he could make anyone laugh with his honest but blunt comments or sarcastic facial expressions. If you were a friend of Jim’s chances are, he drank you under the table at the Rustic Inn where he practiced regularly, then asked you if you were up for a round of golf in the morning. Jim being the entertainer he was, loved to tell stories of his adventures to anyone who would listened, his family will be the first ones to say, we heard them all a hundred times, in a hundred different ways but they never got old. Jim will be greatly missed by all that knew him, he loved life and all that it offered. His incredible heart could be easily seen in the way he loved his wife of over forty years, his children, grandchildren and great grandchildren. His captivating smile which he wore often, his eyes that sparkled like ocean blue water on its most magnificent day, his voice always welcoming and kind, his laugh that allowed him to capture an entire room will be remembered for all of eternity. Jim was a large man with a larger personality. His presence was nothing less than massive. Not to mention, he was Batman….. Jim is survived by his wife and love of his life, Marsha White, his four daughters Katie Leon, Tracie L. White, Allison Radtke Jordan, Charlotte Radtke and only son, Joshua White. He also leaves behind his only brother Bill White ten adoring grandchildren, Jennifer, Christopher, Anthony, Tony James, Breanna, Nancy, Tavo, Esmerelda, Dallas and Jackson. Four great grandchildren, Amare, Wesley, Tony James and Camryn and his special friends Lucky and Chanel.

Lawrence James White, Born 1941 in Winnipeg Canada, peacefully embarked on his final adventure February 17, 2017. In his words, he won the winning lottery ticket. Lawrence aka Jim White served in our countries Army from 1963 to 1965 then returned... View Obituary & Service Information

The family of Lawrence James White created this Life Tributes page to make it easy to share your memories.

Send flowers to the White family.