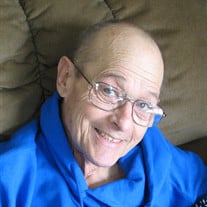 Larry Wayne Sanders went home to be with his Savior Jesus on Tuesday, March 22, 2016, after a courageous battle with lymphoma. Born January 23, 1952, Larry was a lifelong resident of Victorville. He was preceded in death by his parents, Andrew Sanders and Phyllis Sanders Wilson (Bill), and his younger sister Leslie Chenard. He is survived and will be very greatly missed by the love of life, his wife of 41 years, Lani, and his children, Beckie and Peter Johnston of Phelan, Heidi and Adam Miller of Baltimore, MD, Bobby and Jenna Sanders of Pahrump, NV, Tim and Lacey Sanders of Victorville, and his new grandson, whom he adored, Benjamin Miller. He is also survived by his sisters, Linda (Bob) Bowers of Hesperia, Norma Jean Sanders of West Hills, CA, Kathy McGregor of Paducah, KY, and Patti Eddy of Austin, AK, and numerous nieces, nephews, great-nieces and great-nephews whom he loved very much, and Loek, Kim, Lars & Evy Görtzen, of Geleen, Netherlands, along with numerous friends, who all meant the world to him. Larry loved his Savior and was very involved at his lifelong church, Zion Lutheran, in Victorville, serving as a lay minister and congregational president, leading youth group, Bible Studies, many years of Sunday School and VBS classes, and volunteering for numerous projects and committees whenever he saw a need. In 2008, Larry finished a three year Lay Leadership Training Program, becoming a licensed deacon, assisting the pastor with services, hospital visits, and wherever else he could serve. Larry was an alumnus of Cal Poly, San Luis Obispo, University of Redlands and University of La Verne, where he earned his MBA. He was employed in the mining industry by Pfizer Inc., in Victorville, and later in Lucerne Valley when the Victorville plant closed. Pfizer spun their mining division out, becoming Minerals Technology Inc.. Larry worked for the company 35 years before retiring. Larry's family and friends were so blessed to have had him in their lives and will never be able to fill the hole his passing has left. Services will be held at Zion Lutheran Church in Victorville on Saturday, March 26, beginning at 11 AM. Larry will be laid to rest near his parents in Victor Valley Cemetery.

Larry Wayne Sanders went home to be with his Savior Jesus on Tuesday, March 22, 2016, after a courageous battle with lymphoma. Born January 23, 1952, Larry was a lifelong resident of Victorville. He was preceded in death by his parents, Andrew... View Obituary & Service Information

The family of Larry Wayne Sanders created this Life Tributes page to make it easy to share your memories.

Larry Wayne Sanders went home to be with his Savior Jesus on...

Send flowers to the Sanders family.