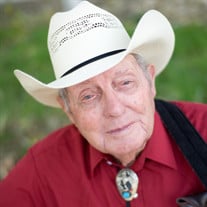 It is with great sadness, we announce the passing of John Calvin Hixon, 92, of Apple Valley, Ca who passed away December 18,2017 in Loma Linda, Ca. He was born February 19, 1925 in Mountain View, Oklahoma to Madison Line Hixon and Ettie Lee Wallace. He grew up on a ranch and learned to play the guitar at the age of 6 when he and his brother traded their bicycle for a guitar. He joined the US Navy when he was just 17 years old, and served his country from 1942 to 1946. After completing his basic training he was placed on the Aircraft Carrier USS BARNES CVE 20 from 1942 to 1943. From that assignment he was placed on the USS CARTERET APA 70 from 1943 until he was discharged in San Pedro, CA in 1946. He was a Gunners' Mate and was also trained in Electro Hydraulics. From this he acquired the nickname "Guns" from his Navy comrades. He was in The Battle of Iwo Jima for his 19th birthday, and was present for the flag raising. He was a plumber most of his life. His favorite past times included watching football and playing country music. He belonged to several bands, including The Oklahoma Ramblers, and the Country Drifters, in which he wrote and recorded the song, "Back to Country" in 1982. His stage name was "Johnny Cal." He met and married his first wife, Marian Murdock Hixon, on September 5, 1944 at the San Diego Courthouse. After the passing of his first wife in 1977, he married his second wife Mildred Zimmerman, who he knew from high school. They remained married until her passing in 2007. The memorial service will be held noon Saturday, December 30, 2017 at The Church of Jesus Christ of Latter-day Saints 12242 Navajo Road, Apple Valley, Ca 92308. Bishop Hume will be conducting. John is preceded in death by his first wife, Marian Murdock Hixon, his second wife, Mildred Zimmerman, his son Paul Calvin Hixon, his granddaughter, Paula Hixon, his parents, Madison Line Hixon and Ettie Lee Wallace, and his siblings, Helen, Virgil, Carl, Dean, Lavern, Donald and James Neal. John is survived by his younger sister, Delois Russell, his three daughters, Mari Jo Carter, Debbie Kelchner, Laurie Frye, his son, John Wayne Hixon, his 13 grandchildren, his 22 great grandchildren, and his two great, great grandchildren (with one more on the way).

It is with great sadness, we announce the passing of John Calvin Hixon, 92, of Apple Valley, Ca who passed away December 18,2017 in Loma Linda, Ca. He was born February 19, 1925 in Mountain View, Oklahoma to Madison Line Hixon and Ettie Lee... View Obituary & Service Information

The family of John Hixon created this Life Tributes page to make it easy to share your memories.

It is with great sadness, we announce the passing of John Calvin...

Send flowers to the Hixon family.