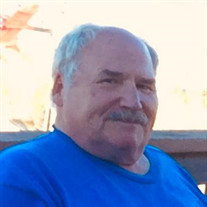 John Edward Cherry, Jr., 72, from Victorville, CA, died suddenly July 18, 2019 at home. John Cherry was born in San Juan, Puerto Rico on October 15, 1946 to John Edward Cherry and Sidonia Cherry . John is survived by his wife, Sheryl; his siblings, Steven and Leah Cherry, Deborah Cherry, James Cherry, Doree Cherry Capasso and husband,Thomas, nieces Kathleen and Elizabeth Cherry and their spouses. Step-sons Edward O’Malley and wife Heather and Charles O’Malley; and 7 grandchildren, Riley O’Malley, Hailie O’Malley, Danielle Espinoza, Trent O’Malley, Lily O’Malley, Raelyn O’Malley, and Eddie O’Malley. He was predeceased by his father and mother and youngest sister, Carol. John graduated in 1964 from Ridgefield Park High School in Ridgefield Park, NJ. He served in the US Army and Army Reserves 1966-1972, with a 1 year tour in Vietnam. With many interests and talents, he worked for a carnival, security at Sears Fashion Center was manager and instructor at Skateland in Owings Mill, Maryland. He graduated to bigger wheels, as an owner/operator with North American Van Lines and then McCollister’s/United Van Lines transporting electronics from coast to coast. Traveling the country afforded him the chance to take unique photographs. Creative photography became a passion, as well as roller skating coast to coast. He was asked to write an article for Roller Skating Magazine. Vol 3 No 3 May/June 1981. While driving for McCollister’s /United, an opportunity to use his tractor trailer in the movie Smokey and the Bandit II, filming in Florida, introduced him to the movie making/film industry. The rest is history. He and Sheryl moved to California where he successfully became a Teamster of Local 399 Hollywood Studio Drivers. Curb Your Enthusiasm, Extreme Makeover Home Edition, The Last Word, Fireflies In The Garden, Crazy People, Awkward, On My Block are a few of the many TV series and movies, commercials and music videos he has worked on. He treasured his family and friends. If you are lucky enough to be John’s friend, you have a friend for life. The respect and love of all those responding to the news of his death shows an example of what a truly amazing man is. “Keep on Truckin’” Earned medals during his US Army service: National Defense Medal, Vietnam Campaign Medal, Vietnam Service Medal, 2 O/S Bars, Expert Rifle A memorial service will be held Saturday, August 3, 2019 at 12 noon at Victor Valley Mortuary,15609 11th Street, Victorville, CA 92395 with a reception afterwards. In lieu of flowers, a gift may be made in memory of John E Cherry Jr. at Wounded Warrior Project. PO Box 758517, Topeka, Kansas 66675-8517 https://tinyurl.com/JohnECherry7-18-19

The family of John Edward Cherry Jr. created this Life Tributes page to make it easy to share your memories.