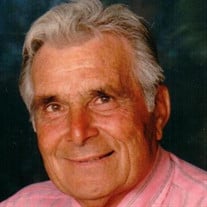 John L Cataneso was surrounded by his loving children, at home, as his soul moved on to be with God, His Angels and Saints in heaven on the afternoon of January 21, 2016. He was 95 years old. John was born in Chicago, Ill on May 1, 1920. He had one younger sister and lived with family until the United States entered World War II in 1941. Soon afterward, John found himself in the Army- Air Corps, training on B-17 and B-24 bombers as a belly and tail gunner. John lest the military in 1946, and was employed by Boeing, in CA, working in the sheet metal department. After that, he went to work plastering new homes, a skill his father had taught him as a young man in Chicago. John met the love of his life Anna, in 1950, at Holy Family parish in Glendale, CA. After he married Anna on April 14, 1951, he completed barber school. He and his brother in law opened a barber shop in Garden Grove, CA, and he worked there until he moved his family to Apple Valley in 1960. John then open his own shop, and continued to service the Victor Valley until he retired in 1985. He and his family were parishioners of St. Joan of Arc Church in Victorville, where John was a member of the Knights of Columbus. He joined Our Lady of the Desert parish after its formation on 1984. John is preceded in death by Anna, his loving wife of 63 years, his father Vincenzo, his mother Theresa Domino, his step-father Philip Domino, and his sister Camille. He is survived by his seven children; Theresa Nordeck, James, Joseph, John, Michael, and Mark of Apple Valley, CA, and Catherine Rosty of Silsbee TX, John also leaves behind 14 grandchildren and 13 great grandchildren. On Monday morning February 1, 2016, the viewing will be from 9:30 to 10:30; the Rosary will begin at 10:30, followed by the funeral mass at 11:00; at Our Lady of the Desert Catholic Church, 18386 Corwin Road, Apple Valley, CA 92307. A reception will be held immediately following the funeral mass at the adjoining parish hall. Graveside will be private. Victor Valley Memorial Park & Mortuary is handling arrangements; 760-245-8164 Flowers can be purchased at Apple Valley Florist, 18245 US Hwy 18, Suite 1, Apple Valley, CA 92307; 760-242-4641

John L Cataneso was surrounded by his loving children, at home, as his soul moved on to be with God, His Angels and Saints in heaven on the afternoon of January 21, 2016. He was 95 years old. John was born in Chicago, Ill on May 1, 1920. He... View Obituary & Service Information

The family of John L. Cataneso created this Life Tributes page to make it easy to share your memories.

John L Cataneso was surrounded by his loving children, at home,...

Send flowers to the Cataneso family.