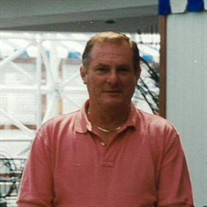 Jess E. Ludrick, Jr., 77 years 317 days, passed away on Monday, March 26, 2018 at home in Victorville, California. Jess was born in Lawton, Oklahoma on April 26, 1940. Jess was preceded in death by his parents, Nelle Anderson Ludrick, and Jess E, Ludrick, Sr. In 1943 the family moved from Lawton to Altus, Oklahoma where his father, Jess Sr. bought a printing company. Jess Jr. attended elementary and secondary school in Altus until 1950 when the family sold the printing business and moved from Altus to Stillwater, Oklahoma where his father worked in the Oklahoma A & M College (now Oklahoma State University) printing department. Jess Jr. attended high school in Stillwater even after his family moved to Plainview, Texas. Upon graduation he joined the U. S. Navy. He completed his boot camp training in San Diego, California. During his Navy career Jess Jr. served aboard several ships, was stationed in Japan, and was a recruiting officer in Lakewood, CA and a military police officer in Hong Kong and a Viet Nam War Veteran. He advanced through the ranks until he attained Chief Warrant Officer. As a Chief Warrant Officer he demonstrated exemplary leadership and was highly respected by the men who worked under him and by the Officers for whom he served. He loved the Navy and after serving 22 years he retired and lived his last years in Victorville, CA. He worked after retirement for a transport company as a scheduling administrator directing the shipment of heavy equipment throughout the United States. During his last years he spent working in the pro shop at the Victorville Golf and Country Club where he made many friends, played in many golf tournaments, and helped those who needed golf advice to improve their golf techniques. Jess was an exemplary model for all of those who were friends and associates because of his dedication to his family, his noticeable work ethic, his incredible strength and zest for life, and his real concern for others. His mild and compassionate personality was a statement of his character and those who knew him and were his friend drew from him that identifiable trait for themselves. He will be missed greatly.

The family of Jess Elmer Ludrick Jr. created this Life Tributes page to make it easy to share your memories.