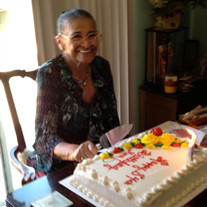 Jeanette B. Foster, (Jean), was born to parents Herman and Jeanette Foster in Brooklyn, NY on May 26, 1929. She lived in Brooklyn until she met and married her husband of 65 years, Edward H. Williams, (Eddie). Jean became a military wife, homemaker and mother. She travelled the world with her loving and quickly growing, soon to be, family of ten. While living in London, England, her extraordinary beauty and social events often hosted by her, were mentioned in a local London newspaper. Jean’s greatest joy in life was without a doubt her children, eclipsed only by the times when the large spread out clan could come together from all corners of the world. Jean had a heart for the less fortunate. She was often known to open her heart and home to those in need. This was always done with a warm, welcoming 1,000-watt smile. Jean was not only a devoted sister in Christ, but also a dedicated wife, mother, mother-in- law, daughter, sister, sister-in- law, niece, aunt, grandmother, great- grandmother and not least of all, a true friend. She was always a tremendous ally to all in need of assistance and always had an encouraging word to help put things right. Three days after her 87 th birthday, on the 29 th of May, 2016, Jeanette went home to be with our good Lord. She passed peacefully in her sleep at her home in Victorville, CA. Jean is survived by her husband Edward H. Williams, her eight children: Wayne A. Williams (Phyllis); Darnell Williams (Jackie); Linda J. Overton (Willie); Darlene L. Waheed (Muneer); Michael E. Williams; Gary K. Williams (Juanlyn); Raymond Williams (Deanna); and Anita E. Polglase (Stephen). Jean is also survived by her siblings: Loretta Parks, sister (NY); Norman Foster, brother, (NY); Elizabeth Foster, sister, (NY); Mildred Fletcher, sister, (NJ), Edward Foster, brother (SC), along with 20 grandchildren, 18 great-grandchildren and a host of nieces, nephews and friends.

Jeanette B. Foster, (Jean), was born to parents Herman and Jeanette Foster in Brooklyn, NY on May 26, 1929. She lived in Brooklyn until she met and married her husband of 65 years, Edward H. Williams, (Eddie). Jean became a military wife, homemaker... View Obituary & Service Information

The family of Jeanette F. Williams created this Life Tributes page to make it easy to share your memories.

Jeanette B. Foster, (Jean), was born to parents Herman and Jeanette...

Send flowers to the Williams family.