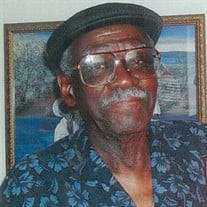 Celebration of Life Obituary Death is a door through which we pass into another room. It is a rest between two notes in an unfinished symphony. It is a page we turn to a new beginning; It is not the fall of night; it is another day’s dawn James Williams, Sr. mission has been accomplished. His father in heaven called and he answered on Wednesday, September 7, 2016. He was born January 17, 1922 in New Orleans, Louisiana to the late Mack Williams and Alberta White. James was preceded in death by his parents, step-father and his only brother, Frank Williams. James (affectionately called “Tuddy” by his family), accepted the Lord at an early age of 9 years old when he was baptized. He renewed his faith and accepted the Lord Jesus Christ as his Savior on June 4, 2016. James received his early education from the New Orleans School District. In 1942; he joined the United States Army and served four years as a Staff Sargent in World War II. In 1949, he united with Gladys Rankins Williams, which led to the legacy of the Williams Family children; Ernest (a Viet Nam Veteran) preceded him in death in 1974, Doris (Roy/Deceased) of New Orleans, Louisiana, Wylene (Robert/Deceased) of Lancaster, California, Marion (Ronald) of Chino Hills, California, Jacqueline (Booker/Deceased) of Fontana, California, Karen (Tyrone) of Palmdale, California, James Jr. (Joyce) of Lancaster, California, and Tracy (Greg) of Apple Valley, California. From this legacy of eight children five generations would develop; 19 grandchildren, 31 great-grandchildren, and 11 great-great grandchildren. One grandchild, Tarrow McCullough preceded him in death in 2003. After serving in the military after World War II, James was employed as a long shore man in New Orleans, Louisiana and assisted his mother with her community grocery store and tavern. In 1955 James decided to move to Los Angeles, California seeking a better way of life for his family. In California, he was employed by North America Aviation for twelve years. He left North America Aviation and began working at Lockheed Aircraft, where he became a supervisor. He retired from Lockheed in 1981. After retirement, James decided to renew his business interest and opened a community tavern until moving to Victorville, California in 1988. James was dedicated to his family. He believed that family always came first and he adored his grandchildren and the many family celebrations at their homes in Los Angeles and Victorville. James was blessed to live to the age of 94-½ years and witnessed five living generations developed from his genetics. He was a joyful senior citizen, enjoyed life in Apple Valley, California (Del Webb Senior Community), loved telling jokes and his mind was sharp as a 21 yr.old until his final days. James final testimony to his family, as he answered to God’s call, was on September 4, 2016 when he called all seven of his children to his bedside. He testified his love and devotion for Gladys in his final words and thoughts to his family asking all seven children to stand at their mother’s side, give her the strength to move forward after 67 years of love and devotion, and keep her grounded in her faith, love and devotion to God. He spoke individually to each of his children about family unity and love. His final words to the entire family was “It’s O.K. for me to go to GOD now, our Heavenly Father, and we all replied yes, it’s O.K. to go home to Our Savior.” The memory of a good person is a blessing (Proverbs 10:7)

Celebration of Life Obituary Death is a door through which we pass into another room. It is a rest between two notes in an unfinished symphony. It is... View Obituary & Service Information

The family of James Williams Sr created this Life Tributes page to make it easy to share your memories.

Death is a door through which...

Send flowers to the Williams family.