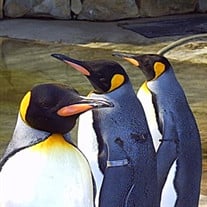 Gwendolyn Marie Robinson (74) passed away September 23, 2015 at the Cove Care Center in Rialto, CA. Gwen was born March 25, 1941 in Pennsylvania to John I. Mitchell and Gwendolyn Y. (Harford) Mitchell. Her father was a coal miner. Father was killed in 1955 due to a mining accident. Three years later Gwen moved with her mother and sister Susan to San Bernardino looking for greater opportunities. Gwen and Susan attended San Bernardino High School. Gwen married William Robinson in 1959. Early 1990’s Gwen moved her family to Victor Valley. Her life’s vocation was in the food services including operating her own catering business Pengwen Catering Service for several years. She volunteered her talents to her church families by running the kitchens and supervising dinners and banquets at churches with which she and her family were affiliated. Gwen was very active with the local Red Hat Society and devoted to the Church of the Nazarene in Apple Valley. Gwen had two sons who preceded her in death: John William Robinson (deceased 2008), Robert Lawrence Robinson (deceased 1991) Surviving relatives include two sons: Allen Robinson of CO; and Andrew Robinson of Nev.; sister Susan Tucker of Texas; granddaughters: Tabatha, Tristan, Gwennie, Jessica; one great-grandaughter of CO; Cousins: Jacky Mitchell, Steven Mitchell, and Steve of Pensylvania; nephew John H.C. Tucker, CA; niece Charie Tucker, Texas. Memorial service with reception following will be held at 10:00 a.m., October 10, 2015 at Apple Valley Church of the Nazarene¸ P.O. Box 2636, 12935 Central Road, Apple Valley, CA 92308. In lieu of flowers, family requests that donations be made to the AV Church of the Nazarene designated to the kitchen fund in memory of Gwen Robinson. Family and friends will mourn our loss till we meet again in the mansions prepared for us.

Gwendolyn Marie Robinson (74) passed away September 23, 2015 at the Cove Care Center in Rialto, CA. Gwen was born March 25, 1941 in Pennsylvania to John I. Mitchell and Gwendolyn Y. (Harford) Mitchell. Her father was a coal miner. Father... View Obituary & Service Information

The family of Gwendolyn Marie Robinson created this Life Tributes page to make it easy to share your memories.

Send flowers to the Robinson family.