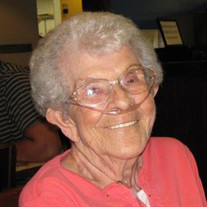 Gladys G. Bourque passed away at home in Victorville, CA on May 19, 2017. Born Gladys Genevieve McCormick on January 4, 1925 in Portland, Maine to Mabel and John J. McCormick, she was lovingly nicknamed “Honey” by her family and friends. On June 8, 1946, she married Philip L. Bourque Jr. in Portland, Maine. Together they had five sons – Philip III (Teet), David, Michael, John and Thomas. Gladys and Phil, along with their two youngest sons, Philip (Teet) and David moved across country from Maine to California in 1956. Upon arriving in CA, they resided in Burbank and Eagle Rock. In 1960, they settled in Rowland Heights and added Michael, John and Thomas to the family. They remained in Rowland Heights until 1988 at which time Gladys and Phil moved to Hesperia, CA. After her husband’s passing in 1995, she lived with her sons and their families in Truckee, CA, Sparks, NV and Victorville, CA. She is preceded in death by her infant son John (1963), her husband, Philip L. Bourque Jr. (1995), eldest son, Philip Bourque III (2003) and nine siblings. She is survived by her daughter-in-law (Philip III’s wife) Sharon Bourque of Victorville, CA as well as her three sons and their wives - David and Michele Bourque of Sparks, NV; Michael and Luanne Bourque of Victorville, CA; Tom and Penny Bourque of Marinette, WI. “Nana” Bourque leaves behind ten grandchildren - Shawn Bourque, Shannon and Kris Devino, Jeremy Bourque, Ryan Bourque, Shellie Carter, Leah and Carlos Martinez, Scott Bourque, Andrew Bourque, Heather Bourque and Aaron Bourque; 17 great-grandchildren, one great-great granddaughter and many, many nieces and nephews. Gladys leaves behind a long legacy of love, laughter and memories. Her greatest earthly gift was her unending love and devotion to her family. Her family rejoices in knowing that she is now dancing in the streets of heaven with her beloved Phil and all of her many loved ones that have gone before her. Funeral services will be held June 2, 2017 at 12:00 pm in the chapel at Victor Valley Memorial Park & Mortuary located at 15609 11th Street, Victorville, CA 92392. A reception following the services will be held at the home of Michael and Luanne Bourque.

Gladys G. Bourque passed away at home in Victorville, CA on May 19, 2017. Born Gladys Genevieve McCormick on January 4, 1925 in Portland, Maine to Mabel and John J. McCormick, she was lovingly nicknamed &#8220;Honey&#8221; by her family and... View Obituary & Service Information

The family of Gladys Bourque created this Life Tributes page to make it easy to share your memories.

Gladys G. Bourque passed away at home in Victorville, CA on May...

Send flowers to the Bourque family.