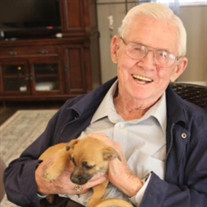 June 29, 1920 – January 24, 2022 George Leon Powers – 101 years old. George Powers was born in Slaton Texas on June 29,1920; passed at the home of his son and daughter-in-law Jack and Lori Powers on January 25, 2022. George passed peacefully after living a full life for over 101 years. George’s wife of 56 years, Nellie Jo, and partner of 26 years Scottie Senne, his son Donald Curtis Powers, parents James Curtis Powers and Clara Pearl Mae Powers preceded him in death, along with his brothers James, Melvin, and sisters Juanita Reed and Oleta Powers. George has a living brother Glenn Powers, of Wichita Kansas. George is survived by his son and daughter-in-law, David and Gloria Powers, daughter and son-in-law Kindred and Michael Murillo, daughter and son-in-law Fran and Dale Lorz, son and daughter-in-law Jack and Lori Powers, and daughter-in-law Joyce Powers. George leaves behind many grandchildren, greatgrandchildren, great great grandchildren, and nieces and nephews. George L. Powers often called Leon, worked for the Atchison Topeka & Santa Fe (ATSF) Railway from 1941 to 1980 after serving in the military. He began his career at the railroad as a machinist and retired as the Assistant Superintendent at the ATSF locomotive repair facility in Barstow, CA. He attended Texas Tech in Lubbock, Texas before as a pre-med student before being drafted into the military. George’s greatest contribution was his family as he deeply loved and was deeply loved by the over 70 members of his family and will be truly missed. He loved and inspired his family and friends.

The family of George Powers created this Life Tributes page to make it easy to share your memories.

Send flowers to the Powers family.