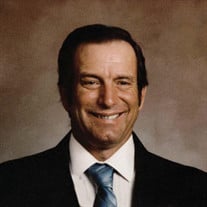 Francis Leamoin “Lee” Paris Jr. 71, of San Bernardino, passed away on Friday, May 19, 2017 in Fontana. He was born at St. Bernardine Medical Center, on March 10, 1946. Lee retired as a heavy duty equipment operator for the County of San Bernardino, operating bulldozers for flood control. He wore out 3 of them in his time there. He was a veteran of the Vietnam War, serving in the U.S. Army, in the 101st Airborne division. Lee was preceded in death by his wife and best friend Colleen, his little buddy Snoopers and his parents, Francis Leamoin Paris Sr. and Adelia May Paris. He is survived by his children, Francis “Len” Leamoin Paris III (Kimberley M. Cheeney) of Phelan; and Tamara Devon Paris of San Bernardino. He is also survived by his sister, Kimberley K. (Charles) OHara of Long Beach; nephews, Charles Jason OHara and Charles Joel OHara; niece, Carin Jennifer OHara; grandchildren, Adelia May Paris, Dalton Alan Paris; his Aunt “Uncle” Archie LeFever, (this is what Lee called her his whole life). He is survived by his step-children Jill Morin, Michael Robinson and Robert Gray; grandchildren, Christopher and Jenna Morin, Catherine and Samantha Gray, Mikey and Marissa Robinson. Visitation will be held on Wednesday, May 31, 2017 from 5:00 p.m. to 9:00 p.m. with the Service starting at 5:00 p.m. both at Victor Valley Mortuary, 15609 11th Street, Victorville, CA 92395. Graveside Service will be on Thursday, June 1, 2017 at 10:30 a.m. at Riverside National Cemetery, 22495 Van Buren Blvd., Riverside, CA 92518. Reception will follow at the B.P.O.E. Lodge, 2055 Elks Drive, San Bernardino, CA 92404, starting at 1:00 p.m. Arrangements under the direction of Victor Valley Mortuary

The family of Francis Paris created this Life Tributes page to make it easy to share your memories.

Send flowers to the Paris family.