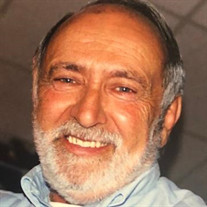 Francis “Frank” Irving Bruce Frank Bruce a loving husband, father, grandfather, great-grandfather and friend, passed away with his wife Lori by his side on December 20, 2020. He was born on August 26, 1935 in Canton Massachusetts. Frank has 13 brothers and sisters and was born to Alice Gardner and Frank Forgione Bruce. Frank attended Eliot School in Canton Massachusetts and after school, some of his work endeavors included working at the Canton Bowladrome, he also worked as a golf caddy, and did landscaping. Frank joined the Navy at 17 and proudly served for 18 1/2 years, serving in Korea, Vietnam, and the Cuban Conflict. He was a cook while serving in the Navy and was promoted to Chief Petty Officer while serving, earning many awards. During his Naval career Frank married Joan L. Keefe and had five children during their 19 years of marriage. He was stationed at South Weymouth Naval Air Station in Massachusetts and Los Alamitos in California. The family moved to California in the spring of 1965 and after several oversea tours, they settled in Orange County, California. Frank began his second career that he always dreamed of, being self-employed owning F.I. Bruce Trucking. Driving a truck meant the world to him and he included his family in his business. While living in Orange County, Frank met and married Dawn Helwig having two children. It was during this marriage where he moved his family to Hesperia, California. Frank’s career in truck driving continued as he was part owner in Mojave Rock and Sand also including his three son-in-laws. While living in Hesperia, Frank met and married Lori Bumgardner. He and Lori continued living in the high desert and started Cal State Express, Cal Rock, and Bruce Family Day Care. He was a mentor to many children that entered his home. Bruce Family Day Care wasn’t just a place where parents would drop off their children until they returned to pick them up, these children become a part of the family. He prepared breakfast, lunch, and snacks every day for the children. Mostly his famous spaghetti sauce. To this day, many of these children have remained in contact with him. He has seen them grow up, graduate high school, college, marry, and now even having children of their own. Frank also enjoyed working for the San Bernardino County Sherriff’s Department at West Valley Detention Center. His love for cooking stemmed from the Navy and he continued to serve in this capacity while at West Valley Detention Center. He even had a way with the inmates during the shifts he worked. Frank had a love for baseball and was heavily involved in his son’s baseball journeys. In Orange County his two sons played and he was a coach. It was always a family affair, as the two daughters helped keep stats and cheering on the team. While living in the High Desert he was heavily involved in Hesperia National Little League, dedicating 12 years managing, coaching, and serving on the board. This is where he made life-long friends. He also volunteered with the Victor Valley College Baseball Team. Frank and Lori were also involved with PeopleLink, an organization placing exchange students. He truly enjoyed this work especially all the people that he met along the way. He touched so many hearts with everyone that he encountered. To this day many of the exchange students would come back to visit and have stayed in touch with him and the entire family. Frank’s most prized possession was his family, which included his chosen family such as friends and neighbors, he never met a stranger. His love for life was contagious. A laugh that brightened any room and you could hear from any hallway. He was most known for his “Frankisims” and they are well known and not always appropriate. Quotes such as “Hey chicken lips”, “Keep your knees together”, or “You’re a Big Strapper” you knew you held a very special place in his heart if you heard one of these. Frank is survived by his wife Lori, together for 36 years. Frank’s children Darlene Rout of Apple Valley, Norine Bruce of Victorville, Jeffrey and his wife Rafaela Bruce of Anaheim, Cathy and her husband Don Duguay of Bryan Texas, Kimberly and her husband Jason Nailon of San Marcos, Jared Bruce of Yorba Linda, and Jacqueline Rockcole of Adelanto. Also survived by his 16 grandchildren, 16 great-grandchildren, and 3 great-great grandchildren. Frank joined in eternal life his son Richard Bruce, grandson William Francis Maples, granddaughter Jennifer Bombardier, brother John Bruce, and two son-in-laws Alan Bombardier and Forrest Rout. A Celebration of Life will be held on January 9, 2021 at 10:00 am at Sunset Hills Memorial Park in Apple Valley, Ca. Followed by a graveside service at Victor Valley Mortuary and an Open House at the Bruce Family Residence.

Francis &#8220;Frank&#8221; Irving Bruce Frank Bruce a loving husband, father, grandfather, great-grandfather and friend, passed away with his wife Lori by his side on December 20, 2020. He was born on August 26, 1935 in Canton Massachusetts.... View Obituary & Service Information

The family of Francis I. Bruce created this Life Tributes page to make it easy to share your memories.

Send flowers to the Bruce family.