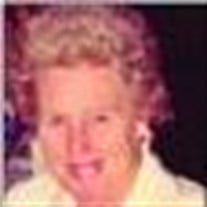 Frances Jeanne Jurden June 6, 1919 - February 16, 2015 Frances Jeanne Jurden, a resident of Spring Valley Lake for the past 31 years, passed away on Monday, February 16, 2015, in Victorville, California. She was born on June 6, 1919 to Forest and Vera Dickerson in Knoxville, Iowa. Her parents, brothers, Vaughn and Charles, and husbands, Jack Harris, James Frederick Pendergast, and Donald Jurden "Blackie" predeceased her. She was an aviator, horsewoman, T'ai Chi Chih skilled, and formally educated in business college. She worked in a bank, as a waitress, owned riding stables and pony rides, and in amusement companies. She later went to work as Show Secretary for Bill Dillard Shows, Inc., "Middle America's Finest Midway" in Edinburg, Texas where she retired from in 1994 with commendation for Goodwill and Loyalty for 25 years service. She was one of the strongest Christian women, mentally and emotionally, in the world. She always found ways of getting joy in life. She was loved and respected by all who knew her. She leaves one child, Pat.

The family of Frances Jeanne Jurden created this Life Tributes page to make it easy to share your memories.

Send flowers to the Jurden family.