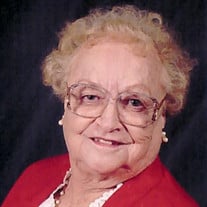 Eleanor Kemp, 90, passed away on March 3, 2017 with family by her side. "Ellie" was born on May 28, 1926 in Van Nuys, CA to Dewey and Lucy Reeser. Eleanor and her twin sister Virginia first lived on a family farm which, today, is part of Sepulveda Boulevard in the San Fernando Valley. Along with her sister Virginia, Eleanor has four younger sisters -- Marion, Barbara, Wilma and Shirley -- and one brother, Merle. While working in a munitions factory during World War II, Eleanor met a fellow worker named Harry Kemp. Harry and Ellie dated for a short while until Harry joined the Army and was assigned to General George Patton's occupation force in Germany toward the end of the War. While Harry was away, Eleanor still was involved in the war effort at home. She continued working at the munitions factory but later became a riveter ( yes - "Ellie the Riveter") on an aircraft assembly line making P38 fighter planes for Lockheed Aircraft. With the end of the war in Europe, Harry was discharged, returned to California and married Ellie in 1948. They made their home in Pacoima, CA where Harry started his 34 year career with the US Postal Service. Harry and Eleanor were blessed with three children - Carol, Steven and Patricia. Eleanor was dedicated to raising her children but when they became older, she went to work for the Los Angeles Unified School District working in Food Services at the elementary school level. Eleanor worked at this new career for 13 years. Ellie and Harry retired in 1982 and later moved to Victorville, CA. Harry and Eleanor saw their family grow several times with the addition of seven Grandchildren - Kimberly Facko, Stacy Facko, Lauren Facko, Ryan Kemp, Christina Kemp, Kevin Bowman and Christopher Bowman. Then came four great grand children, Elizabeth Magana, Gabriel Magana, Jacquelyn Magana and Fernando Magana. Besides spending time with their grandchildren, Harry and Eleanor enjoyed their time at their cabin in Big Bear, CA. They also enjoyed extended trips to Europe and destinations within the United States and Canada. Eleanor had a lifelong hobby in gardening, sewing and needlework and took up pottery painting during her retirement years in Victorville. Harry and Eleanor celebrated their 68th anniversary last year. Harry is originally from Coshocton, OH. He likes to explain that he "came to California because he heard that the streets were paved with gold - and the gold he found was Eleanor". Throughout her life, Eleanor's positive attitude and willingness to lend a hand to anyone that needed help has allowed her to touch the lives of many people - young and old. She can truly rest now with the assurance that, in her own way, she has made the world a better place. Her family and friends grieve her passing but are assured that she is now in the hands of the Lord and has been reunited with loved ones that have passed before her.

Eleanor Kemp, 90, passed away on March 3, 2017 with family by her side. "Ellie" was born on May 28, 1926 in Van Nuys, CA to Dewey and Lucy Reeser. Eleanor and her twin sister Virginia first lived on a family farm which, today, is part of... View Obituary & Service Information

The family of Eleanor Mae Kemp created this Life Tributes page to make it easy to share your memories.

Send flowers to the Kemp family.