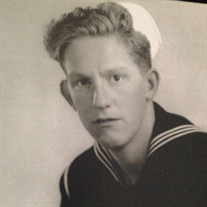 Edward Ernest Carter, born July 1, 1929 in New Boston, Mercer County, Illinois to John Smith Carter (1983) and Louise Madeleine Smith (1955) died March 23, 2015 in Adelanto, California. Edward “Ed” Carter, 85, passed peacefully at home the morning of March 23rd with his wife of 66 years and his grandson, Daniel, by his side. He is survived by his wife, Mary Julia Carter; by their four children: Trudi Carter Smith; Carrie Louise Carter; John Edward Carter and his wife, Diana; and David Sylvester Carter; by eight grandchildren: Andrew Carter Smith; Zebulon Dale Lemley and Zachery Russel Lemley; Jacob John Carter and his wife, Katie; Jessica Anna Carter; Daniel Edward Carter, Breeana Ashley Carter, and Mayson Alan Carter; by three great-grandchildren: Kylene Noel Carter, McKayla Nicole Carter; and Lillianna Rose Blumberg; by his sister, Juanita Elaine Frizzell and her husband, Richard Garland; nieces Luana Jane Hurd and her husband, Chuck and Garlana Kay Nishikawa and her husband, Ed; by brother-in-law Sylvester Baldwin; sisters-in-law Marjorie Helms and Georgia Smith her husband, Skip and; and by numerous great-nieces, great-nephews and cousins. Ed served in the US Navy as a Sea Bee from July 23, 1946 to February 10, 1950. Serving his country as a Sea Bee, 103rd Battalion, was his proudest moment. He kept in touch with fellow-Sea Bees through Facebook and email and traveled to attend wherever the battalion's reunions were held. After serving his country, Ed settled in California and began work as an aviation mechanic on the flight line at North American Aviation (Rockwell), Redondo Beach. He left NAA in 1968 to work in metallurgy at Anadite Corp. and, later, as superintendent of maintenance for Wilsona School District until retirement in 1984. He was a member and served on various committees of St. Paul's Methodist Church in Redondo Beach,California. As well, he guided his sons through the YMCA Grey Y program. After he relocated in 1973 to Adelanto, Ed served as a board member and president for both the Adelanto Community Center and Homeowners' Association. He attended Church of the Lake in El Mirage. He served his country, his community and his church loyally, but he was mostly known and admired for the dedication and love he gave to his wife and children. The quintessential “family man” Ed Carter leaves us grateful. We will miss you, Dad – rest in peace

The family of Edward E. Carter created this Life Tributes page to make it easy to share your memories.

Send flowers to the Carter family.