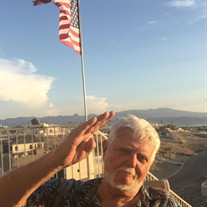 Doug Dulin was born Douglas Dennis Dulin in Allegan Michigan to parents, William Eugene Dulin and Myrtle,(Margo) Marguerite May on August 27th, 1938. Doug was an only child, but was mostly raised by his stepfather Robert Ertel, he resided off 8-mile road in Detroit, Michigan. His aunt Babe acted as surrogate mother along with his grandpa, Charles May. Doug ran away from home when he was 13 years old and found his way to San Bernardino where he lived until he was 16 years old. His mother toward the end of her life had been married over 13 times and his dad had an extensive FBI file and disappeared in 1949. Because he lived on his own, he got into a bit of trouble, such as the time he rode his motorcycle through the halls at San Bernardino High School. Doug was a self-made man, forever an optimist with a kind heart and generous spirit. He was a great problem solver and many of his friends asked him for advice over the years. One of his favorite sayings was, “it will always go if you push hard enough”, and he knew because he had to push hard really hard at times during his life. He has stated on more than one occasion that a life defining moment for him was after he was expelled from San Bernardino High School, he was required to speak with a high school psychologist. He doesn’t know his name, but he credits him with giving him self worth. Doug was given an IQ test, the psychologist stated, he had never tested anyone as smart as him, IQ of 160 plus, and that he could do anything he wanted. He also told him to take his birth name, Douglas Dulin, instead of using Denny and whatever his mom’s husband of the year sir name was at the time. Doug joined the Army in 1955 at the age of 16 . Later he would recount this was the best thing that happened to him as he got 3 square meals a day and started his path to education. After he joined the Army, he was able to finish his high school education as well as have college credits. He was honorably discharged in1958. In 1962, he joined the bridge department for Caltrans as an Assistant Transportation Engineer where he supervised the construction of over 50 bridges in the Inland Empire and San Diego County. In 1960 he married June Bennett. June was first his wife from 1960 until 1982. During this time, he lived in San Bernardino. It was while inspecting the 15-freeway bridge in Lytle Creek that he fell inside a bridge pier and injured his back. Doug had back surgery and his surgeon was Jerry McManus, and they forged a lifelong friendship, which included Doug introducing Jerry to flying. Due to his injury, Doug changed his career to become a Real Estate Broker. June and Doug raised five children, Dawn, Diann, Dan, Dene' and Deidra. In the mid 1980’s Doug began to work for Glenn Ludwig first with Ludwig Engineering and then with American Dream Homes. Doug began to purchase property in the city of Lake Havasu at this time. Also, in the 80’s Doug met Carol Donegan and they were married in 1992. They moved to Lake Havasu full time in 2003. Doug had gone back to work at Caltrans 2001 to assist with the earthquake retrofits of bridges and fully retired in June of 2003. Doug and Carol built a life in Havasu which included helping Doug’s friends move to Havasu, this included Doug and Barbara Blum, Barney and Joanne Tumey, and countless other people. This life included Carol’s children, grandchildren and great grandchildren and frequent visits from his children as well. Over the years Doug made many friends, but he counts his best friends as Glenn Ludwig, Jerry McManus (pre-deceased), Jerry Tilley, Doug Blum, Larry Daniels, Rondy French, and Barney Tumey. All of these gentlemen held a close place in his heart. Other accomplishments for Doug were sailing back from Hawaii, on his uncle Chuck’s yacht the Sagacious, owning sailboats and other boats to traverse ocean and freshwater ways. Doug and Carol owned the only double decker pontoon boat on Lake Havasu with a slide and this was always a sense of pride. Anytime he was floating at the river he invited people from the boats in the cove to go on the slide, there were many takers. Doug also owned several airplanes and held a Commercial Pilot’s License and Glider Pilot license. Doug was a Civil Engineer as well as Real Estate Broker and held a master’s degree in Psychology from Cal State San Bernardino. Doug enjoyed life and believed that everyone should follow the same mantra and live life to the fullest. Doug passed away peacefully on May 1st, 2022, surrounded his family. He is survived by his 5 children, Dawn Dickerson, Diann Dulin, Dan Dulin, Dene' Crandall, and Deidra Dulin and his grandchildren, Sean Dickerson, Dulin Dickerson, Delaney Dulin, Daniel Dulin, Micaela Garcia, Cole Crandall, Hannah Crandall, and Ben Dulin. He is survived by his second wife, Carol Dulin and his stepson Michael Donegan. He is also survived by 4 step grandchildren, Matthew, Kaitlyn, and Michael Donegan as well as John Donegan IV and two great grandchildren, John Donegan V (Jack) and Alice Donegan. He was predeceased by his parents Myrtle May and William Dulin and his stepson John Donegan III. Doug’s memorial service and wake will be held in the beginning of June based on availability at Riverside National Cemetery. He will be interred with full Veterans honors and the wake will be held the same day after the interment. Suggested dates are the first three Fridays in June. Please reach out to his daughter Dawn Dickerson for details at 909-229-5937 via text or message.

Doug Dulin was born Douglas Dennis Dulin in Allegan Michigan to parents, William Eugene Dulin and Myrtle,(Margo) Marguerite May on August 27th, 1938. Doug was an only child, but was mostly raised by his stepfather Robert Ertel, he resided off... View Obituary & Service Information

The family of Douglas Dennis Dulin created this Life Tributes page to make it easy to share your memories.

Send flowers to the Dulin family.