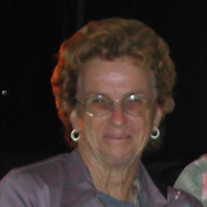 Dorothy May Graham is now face to face with the Lord and Savior, and is no longer trapped or struggling with the effects of Alzheimer's Disease. She passed away on November 25, 2020 in her Victorville home of sixty-two years. Dorothy was born... View Obituary & Service Information

The family of Dorothy Graham created this Life Tributes page to make it easy to share your memories.

Dorothy May Graham is now face to face with the Lord and Savior,...

Send flowers to the Graham family.