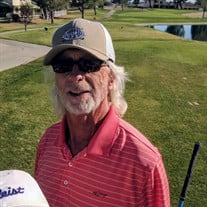 David Roper, resident of Helendale, California and formerly of Burley, Idaho, left us far too soon on Monday May 4th, 2020. He was 67 years old. He died at St. Mary&#8217;s hospital in Apple Valley, California from complications of enteritis.... View Obituary & Service Information

The family of David Roper created this Life Tributes page to make it easy to share your memories.

David Roper, resident of Helendale, California and formerly of...

Send flowers to the Roper family.