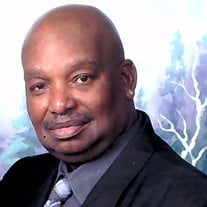 Clifton Leroy Simmons April 30, 2016 - July 31, 1950 Clifton Leroy Simmons of Hesperia, California was born in New Braunfels, Texas on July 31, 1950. He went home to be with the Lord on April 30, 2016. He was educated in Texas and worked many years there with Longhorn Cement. He later relocated with the company's affiliate, Mitsubishi Cement, to California. Early on in his young adult life, someone said to Clifton, "Having a job is hard work at times. Get one and stay with it." He apparently took that good advice to heart. He worked at the company until his passing. Clifton was a very easygoing and friendly person who made everyone around him feel comfortable. He was aware of the needs of others and did his best to help out. His love and compassion made a lasting impression on others. He also enjoyed watching football, basketball, and baseball games and sharing laughs and jokes with his family and friends. He was a diehard Dallas Cowboys and Los Angeles Lakers fan. He became a Raider fan. Big Cliff really like sports! He loved his family much, much more. He was greatly loved in return by his wife, son, and daughter, as well as all of his kinfolk. He was adored by his granddaughters. Toward the end of his life, Clifton made his peace with his Creator and happily accepted Jesus Christ as his savior. Clifton Simmons leaves many to cherish his memory. Among them: His wife, friend, and soulmate Violet Ann Simmons; one daughter, Vanika Marlow and husband Kenny; one son, Clifton Simmons; twin granddaughters, Kira and Paige Marlow; brothers: Edward Simmons and wife Gwen; Charles Simmons and wife Rhonda; Philip Simmons; Alexander Simmons; Sisters: Elizabeth Wyatt and husband Robert; Zeralda Simmons and husband Pete. Brother-in-law: Bennie Coe, Rev. Herbert Coe and wife Susan; Eric Coe and wife Kim; Larry Coe; Sydney Coe; Sister-in-law: Dorothy Hatfield and Lou Cynthia Fuller. His brother-in-laws and sister-in-laws were more like brothers and sisters to him. A great many nieces, nephews, and friends whose lives he touched and who love him dearly. He was a Father figure to many of his brothers-in-law, nieces and nephews. Preceded in death are his parents: Edward & Ophelia Simmons and sister Thelma Escobedo. His family would like to thank friends for their love and support. Serenity Hospice, the great care given by Dr. Vodur Reddy & staff, Dr. M. Patel & staff, who treated him like family and gave care with repect and integrity, and Dr. Nanda Biswas and her staff who also treated him quite well. Clifton, you will be missed in our lives. See you on the other side. Service will be held at Victor Valley Mortuary on Monday, May 9, 2016 at 11 AM.

The family of Clifton Leroy Simmons created this Life Tributes page to make it easy to share your memories.

Send flowers to the Simmons family.