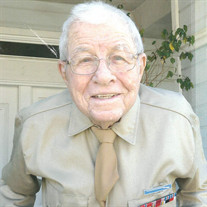 Chalmer Dean McCarty June 1, 1923- April 11, 2018 Chalmer “Dean” McCarty was born to Pearl and Ferill McCarty in Liberal Missouri June 1, 1923. When he was 6 weeks old his parents drove from Missouri to California, and eventually settled in Glen Avon, now Rubidoux, and then Riverside California. Dean attended Glen Avon and riverside schools and started attending Riverside City College studying entomology, but on September 17, 1942 his studies were interrupted when he enlisted in the Army to fight in World War II. While growing up with his brothers he had dreamed of flying and been enamored with the World War I flying aces. His hope was to join the Army Air Corp but as fate, and the army would have it, his plans were changed and he served from 1942-1946 in the 263rd infantry regiment in Europe and northern France and was honorably discharged April 1946. After the war Dean began working at the Citrus Experiment Station for the University of California Riverside where he met his lifelong love, Mary Eleanor Klarer, whom he married after proposing on the second date, on August 1947 at Asistencia Mission in Redlands, CA. Dean and Mary then spent 2 years at the University of California Berkeley while he finished his college degree, after which they returned to Riverside and he began work for UCR doing research and publishing many scientific writings. He retired from UCR after than 30 years service ultimately settling in Apple Valley and Wrightwood CA. Dean’s love of flying, while sidetracked by the army, continued and led him to obtain, along with his wife Mary, his private pilot license. He subsequently owned and flew many small aircraft, most notably his 1929 Arrow Sport biplane which he meticulously restored and kept at Flabob airport in Rubidoux. In addition he was an avid collector of airplane models and books which he enjoyed reading. Dean was preceded in death by younger brothers William (“Willie”) and George McCarty and his beloved wife Mary K. McCarty. He is survived by son Kenneth Dean McCarty. He was greatly loved, and loved others greatly during his time on earth, and will be sorely missed but never forgotten, as his love and kindness will live on. Private interment will be at Montecito Memorial Park, Colton

The family of Chalmer Dean McCarty created this Life Tributes page to make it easy to share your memories.

Send flowers to the McCarty family.