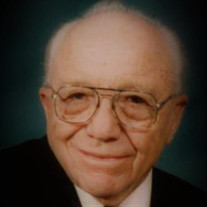 Obituary for Cecil Thomas James Cecil Thomas James passed away peacefully on Tuesday, January 12, 2021 at his daughter’s home in Barstow, California. Cecil was 95 years old just 12 days short of his 96th birthday. He was born on January 24, 1925 in Tilden, Nebraska. He was the 6th of 11 children born to William Emery and Lorilla Mae James. After dropping out of high school after 9th grade, Cecil was farming with his dad when he went to Bible Camp where he met and ended up marrying his wife of 65 years Doris Elaine Rouse in 1944. After serving two years in the U.S. Army and a veteran in World War II, they settled down in Tilden to work and raise a family. He opened his own blacksmith shop and worked as a welder, carpenter, and TV salesman and repairman for Sylvania. Cecil and Doris were married 5 years when they first welcomed a pink bundle of happiness, Beth Elaine. Five years later a blue bundle arrived, Thomas Lee, and five years after that they received their last blue bundle of joy, William Lynn. In 1956, Cecil started working in construction as a welder and electrician on the Saint Lawrence Seaway in upper state New York. He continued in this line of work for 11 years moving with his family 9 times in 5 different states before 1967 when he moved with his family to Barstow, California where he and Doris opened and operated a laundry and dry cleaning business, Norge Cleaners for 25 years before retiring in 1992. In 1962 Cecil joined the Niagara LaSalle Masonic lodge in Niagara Falls, NY. He went through all his degrees to become a Master Mason, and in 1974 became a Shriner with the Al Malaikah Shrine in Los Angeles. He also was a long time member of the American Legion, the Route 66 Mother Road Museum, and the Elks Lodge. Cecil loved Amateur Radio and got his license in New York state in 1959. He was an active member of the Barstow Amateur Radio Club since 1972 serving in various offices over the years. He was also happy to help interested people get their own license and helped set up many towers and antennas over the years. He made sure his wife Doris, his three kids, and numerous other family members got their “Ham” licenses as well. His last and favorite call sign was W6HUG. Cecil has also been a lifetime member of Barstow Senior Citizens Center since it was first started by Wanda Bethel as Mojave Valley Senior Citizens Center in 1976. He enjoyed having lunch there every day and visiting with his many friends over the years. Having both been raised in Christian homes, Cecil and Doris were members of the Barstow First Church of the Nazarene, and he later called Lenwood Community Church his home church. God and family always came first in their lives. Cecil is survived by daughter Beth and William Torrez of Barstow, CA, son Thomas and Marie James of Barstow, CA, and son William and Kathaleen James of Agua Dulce, CA; grandsons James, Christopher, Aaron, Benjamin, Michael, and Marcus and thirteen great grandchildren; sister Helen Halsey of Norco, CA, brother Herbert James of Chula Vista, CA, brother Wayman and Minga James of San Antonio, TX, brother Lyle James of Warren, MI, and brother Milan James of Wichita Falls, TX, and numerous nieces, nephews, cousins, and friends. In lieu of flowers the family asks that donations be made to Barstow Senior Citizens Center, 555 Melissa Ave., Barstow, CA 92311. A memorial service for immediate family only will be at 10:00 am on Monday, February 1, 2021 at the Lenwood Community Church, 25104 W. Main St, Barstow, CA 92311. It will be live streamed on YouTube, and the link will be on the church’s website, http://www.lenwoodcc.org. The link will also be on the family members’ Facebook accounts. Burial will be private at Riverside National Cemetery. Victor Valley Mortuary is handling arrangements.

The family of Cecil Thomas James created this Life Tributes page to make it easy to share your memories.

Send flowers to the James family.