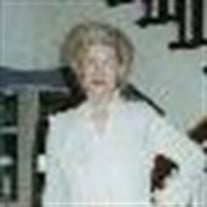 Bernice Boggs, longtime resident of Hesperia, CA, passed away Saturday, April 25, 2015. Bernice, know to many as Bea, was born in Green Forest, AR in 1918. She was one of the youngest of 10 children, all born in the same farm house. After finishing school, she embarked on her first adventure, moving out to California with her brother and sister-in-law, Fred and Marge. Not long after moving to Calif, WWII started and she worked in an airplane factory, one of the many 'Rosie the Riveters' doing their part to support the war economy. Over the years, Bea held interesting jobs and lived several places including Denver, CO where she worked for many years as a waitress at Denver Dry Goods, where she was adored by her regular customers. Over the years she embraced her sense of adventure and enjoyed many oversees trips, cruises and jaunts to Las Vegas, where you could find her playing the penny slots. Bea, loved playing cards with friends, dancing and singing. For many years she sang with the Leisure League Ladies of Hesperia and attended the weekly dances at The Leisure League where her dance card was always full. She is remembered for her joyful exuberance and always finding the humor in things. She is survived by her by her two daughters, Diana Francis of Apple Valley, CA and Sharon Connelly of Austin, TX and her son David Pratte of Eerie, PA. She also has six grandchildren and 13 great-grandchildren. A memorial service will be held on May 5th at 2pm at the Victor Valley Memorial Park and Mortuary, 15609 11th St. Victorville, CA 92395. Memorial gifts may be made in Bea's honor to High Desert Hospice Services (Victorville, CA), National Parkinson Foundation (http://www.parkinson.org/) and the American Lung Association (http://www.lung.org/).

Bernice Boggs, longtime resident of Hesperia, CA, passed away Saturday, April 25, 2015. Bernice, know to many as Bea, was born in Green Forest, AR in 1918. She was one of the youngest of 10 children, all born in the same farm house. After... View Obituary & Service Information

The family of Bernice Ethel Boggs created this Life Tributes page to make it easy to share your memories.

Send flowers to the Boggs family.