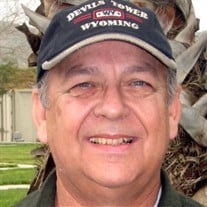 Allan Eugene Pugh, 68, passed away on Monday, June 3, 2019 at his home in Victorville, California due to a long battle with both pulmonary fibrosis and hepatopulmonary syndrome. He leaves behind his wife Donna; his three sons Robert, Matthew, and Steven; his mother Velma Pugh-Trisler; his sister Anita Rowland; his brother Brian Pugh; his two grandchildren Audrey and Christopher; his two aunts Lela and Wilma; his nieces Dominique, Katie, and Krista; his nephews Scottie, Shawn, and Blair; his best friend of 30 years Robert "Bobby" Martin, and many other close friends. Awaiting him in heaven are his father Robert Pugh; his sister Karen Wright; his grandparents S. Bruce & Elsie Pugh and Elza & Lula Sharp; and his 14 aunts and uncles, including his uncle and mentor George Dean Pugh. Born in Centralia, Illinois on February 7, 1951, the son of Robert and Velma Pugh, he spent much of his formative years in Patoka, Illinois and Upland, California before settling permanently in Victorville. After graduating from Upland High School in 1970, Allan and his first wife settled in Patoka where they had a son together, Robert. Allan spent his younger years as a dairy farmer on the Pugh Family Farm with his new family and his Uncle Dean. After his first marriage ended, Allan moved back to Upland where he met his wife Donna on a blind date in 1976, getting married in 1984. Allan had a career in the concrete industry for many years working for Cement Lining Specialties, Hi-Grade Materials, City Concrete, and Agcon Materials. He then decided to change careers becoming a Scale Operations Supervisor for the County of San Bernardino, California, where he retired on August 10, 2013. Allan took great pride in his career and was always a great co-worker, making many friends along the way, including his best friend, Bobby. Allan had an affinity for the great outdoors, enjoying many outdoor activities, including camping, fishing, and hunting. Allan also enjoyed shooting skeet and trap and was a long-time member of the San Bernardino County Sheriff’s Gun Club in California. His love of farming lead him to becoming an avid gardener, and he took great pride in growing his own fruits and vegetables as well as keeping the yard at his home in top form. Allan’s family would like to give special thanks to UCLA Ronald Reagan Medical Center of Los Angeles, his lung donor, and Community Hospice of Victor Valley for helping him with his long struggle with two terminal illnesses. A memorial service will be held at Victor Valley Memorial Park on June 29th, with a private reception following.

Allan Eugene Pugh, 68, passed away on Monday, June 3, 2019 at his home in Victorville, California due to a long battle with both pulmonary fibrosis and hepatopulmonary syndrome. He leaves behind his wife Donna; his three sons Robert, Matthew,... View Obituary & Service Information

The family of Allan Eugene Pugh created this Life Tributes page to make it easy to share your memories.

Send flowers to the Pugh family.