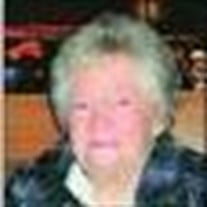 Agnes B. (West) Manzer December 24, 1921 - February 6, 2015 Longtime Victorville resident, Agnes Manzer, passed away February 6, 2015, from age-related illnesses. Agnes entered this world on December 24, 1921, and after 93 years, went to join her husband and 2 sons. She was born in Round Mountain, NV to Randall B. and Marie Crane West. Agnes married Shelley C. Manzer on July 19, 1941 in Tonopah, NV. They had 8 children, 6 boys and twin girls. They lived in Tonopah and Silverpeak, NV until the summer of 1955, when they relocated to Victorville, CA with their 5 sons at the time. Their youngest and 6th son was born a few years later followed by twin daughters. Following Shelley's death in 1969, with five children remaining in the home, Agnes learned to drive and went to work at St. Mary's Hospital and McDonald's. She also owned Agnes' Art Supplies on 7th Street in Victorville. Once retired, she enjoyed walking to and from daily mass at St. Joan of Arc Catholic church, stopping at McDonald's on the way home for breakfast and visits/lunches with her friends. She enjoyed oil painting until her sight started to fail, and then she turned to bus/or family trips to any casino with nickel slots that she could arrange. As her health began to fail, in 2007, she moved to Orange County, closer to more of her family. She is survived by sons Thomas (Lynne), James (Patty), Steve (Melody), Richard (Stacey); daughters Marilyn (John) Diebold and Marian Manzer; many grandchildren, great-grandchildren, great-great grandchildren; and one brother Frank West. Agnes was preceded in death by her husband Shelley, two sons Robert and Donald, daughter-in-law Cindy, two brothers and two sisters. June 5, 1993: "I really want those who are present to be happy for the times we had together and remember the goofy things and laugh and dance, for I'll be watching and enjoying too." Love, Mother. There will be a graveside service at Victor Valley Memorial Park on Friday, March 13, 2015 at 1:00 pm where she will be laid to rest with Shelley. In lieu of flowers, please make a donation to your favorite charity.

The family of Agnes B. Manzer created this Life Tributes page to make it easy to share your memories.

Send flowers to the Manzer family.